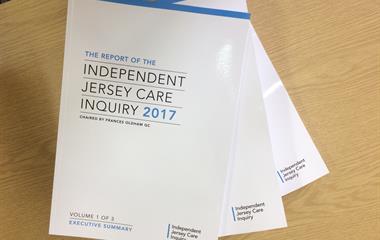 The panel that carried out the Independent Jersey Care Inquiry are returning to the island to check on progress improving how young people are looked after.

The review will be done in July, on the second anniversary of the Inquiry's findings.

The panel's return was one of the recommendations set out in chairwoman, Frances Oldham QC's final report.

"....the Panel returns to the island in two years to hear from those providing the services and those receiving them.  We would envisage that this would be undertaken in a public forum, similar to Phase 3 of the Inquiry.  It may be that the Children's Commissioner, when appointed, could invite the Panel, who would report within a very short timescale after hearing from key participants."

The Children's Commissioner Deborah McMillan says she has formally invited Frances Oldham, Professor Alexander Cameron and Alyson Leslie back to Jersey and prepared a timeline for their work.

"I want to hear if things are better for children, how things have changes since the Inquiry and what else needs to be done."

The expected £180,000 cost of the review has already been agreed by the government as part of the response to the Inquiry findings.

A public consultation will run this month and next, with hearings in May and a final report by July 2019.