The Children's Commissioner wants more transparency on data around young offending, after she calculated that the rate of offences among 10 to 17-year-olds in Jersey appears to be higher than anywhere in England and Wales.

There were 174 recorded offences committed by children aged under 18 in Jersey in 2018.

That equates to around 18 offences per 1,000 children.

The highest rate in England is the North East at nearly 16, as revealed by the England and Wales Youth Justice Board.

Channel 103 requested data on offences committed by 10-17-year-old's in Jersey. Offences couldn't be provided, but the number of offenders and victims of youth offending over the last six years was provided: (data as of 11 February 2020) 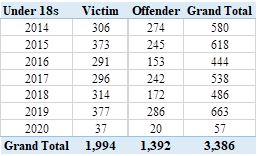 It shows a huge jump in both the number of offenders and victims in 2019 compared to the previous year.

Children's Commissioner Deborah McMillan has accessed the data available and says there seems to be quite a high level of offences.

"We might be talking about a small group of young people committing more than one offence. But with the data that I've seen, it does look like the rate of offences is quite high and that's why I want to understand the data better so that we can truly understand what it is that needs to be done."

The Commissioner also revealed that the top offences committed by young people in Jersey, as revealed by Jersey Police, is assault - followed by drugs and criminal damage. There's a similar pattern in England and Wales, but drugs is lower down the list.

"We need to understand why the prevalence of drugs is high. I'm really pleased to see that the Education Department and police and probation are working well together to make sure that they're looking into that and providing an education package for children as well."

"There's plenty of figures and data, but there's very little qualitative evidence about why children and also why other professionals believe that the rate of offences is as it is.

"Let's go and listen to them and then when we've heard from them, I can you a much better decision on that (rate of offences)" - Deborah McMillan, Children's Commissioner.

The Commissioner has just launched a review of Youth Justice in Jersey, which you can read more about here.