The government says around 500 tests a day to see if people currently have coronavirus will be carried out from next week as 'testing facilities have been considerably expanded'.

That features a double lane drive-through testing centre near the airport, a satellite lab for packaging tests, and a mobile test and packaging vehicle.

There's been an average of more than 200 PCR tests a day done over the last week. They are targeted at asymptomatic frontline workers who are positive for COVID-19 and spreading the virus but don't know it, in a process called 'chasing the virus'.

The workers already contacted or soon to be contacted for a PCR test are: 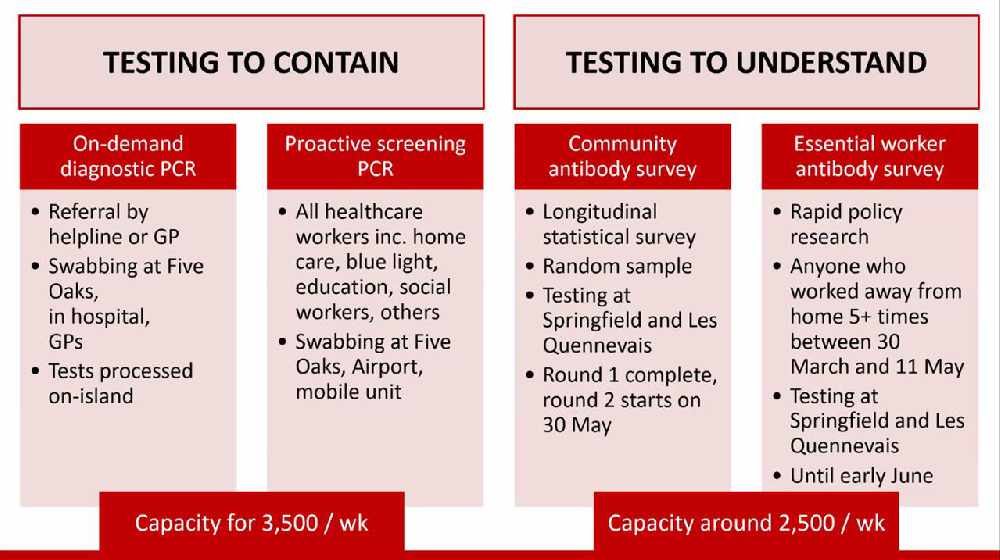 Director of Strategy and Innovation, Steve Skelton, says around 8,500 thousand people at high-risk or on the frontline have been identified in the first phase of PCR testing.

"Of those, if we take as our definition of health and care to include hospital care home workers, home care workers, you might want to include care home residents in that as well, it's probably about 60-70% of that sample in that 8,500.

The government says around 100 care home residents and staff are proactively tested every day.

Work to give antibody tests to essential workers started yesterday and is set to be extended to more people outside government from next week. It relates to people who've left home for work more than five times during lockdown. They are being tested at either Springfield or Les Quennevais.

There are two types of antibody test in Jersey, which are:

* A single pin-prick of the finger, with results back in between 10 and 25 minutes. They will be given to essential workers and the randomly-selected households.

* A more comprehensive blood test, taken from a vein and screened on machines in the Pathology Laboratory.

Dr Ivan Muscat explains the two types of testing - PCR and Antibody - being carried out to monitor and contain the spread of COVID-19 in Jersey. https://t.co/sJnnulbKPL

There is no conclusive evidence yet to show that testing positive for antibodies proves you have immunity.

The Chief Minister revealed in a media briefing earlier this week that a more accurate type of antibody testing would be trialled in Jersey in the coming weeks.

The current antibody tests on island have a sensitivity rate of around 80%. That is not deemed robust enough by the World Health Organisation or Public Health England to give definitive details to people with their results.

"The other test that we currently have on island which is still being validated at the moment is a laboratory-based Abbott IGg test which has a close to 100% sensitivity and specificity.

"That is sufficiently robust to allow us to give an individual their result and tell them that this, whether it's positive or negative, is your result today.

"We hope that test will have been validated within the next week or two."

The first round of randomly selected household tests happened at the start of this month, with 438 households and 855 people all over the age of 16 taking part.

From that data, Statistics Jersey estimated that around 3,300 people were infected with the virus.

The second round of tests will take place between 30 May and 2 June. 1000 households will be contacted for that round. Only 500 were contacted for round one.

They will be tested every four weeks until early autumn to show how the virus is spreading.

There are no current plans to launch a contact tracing app in Jersey, but a digital contact app is due to be used when borders are opened and Jersey exits lockdown. The government says its working with Digital Jersey and UK and Irish development teams to consider options for a local app 'that meets the needs of residents and travellers to and from the island'.

Jersey has now gone two days without any new coronavirus cases. 306 people have tested positive, of which 272 have recovered. Only five people are currently confirmed to be active cases in the island.