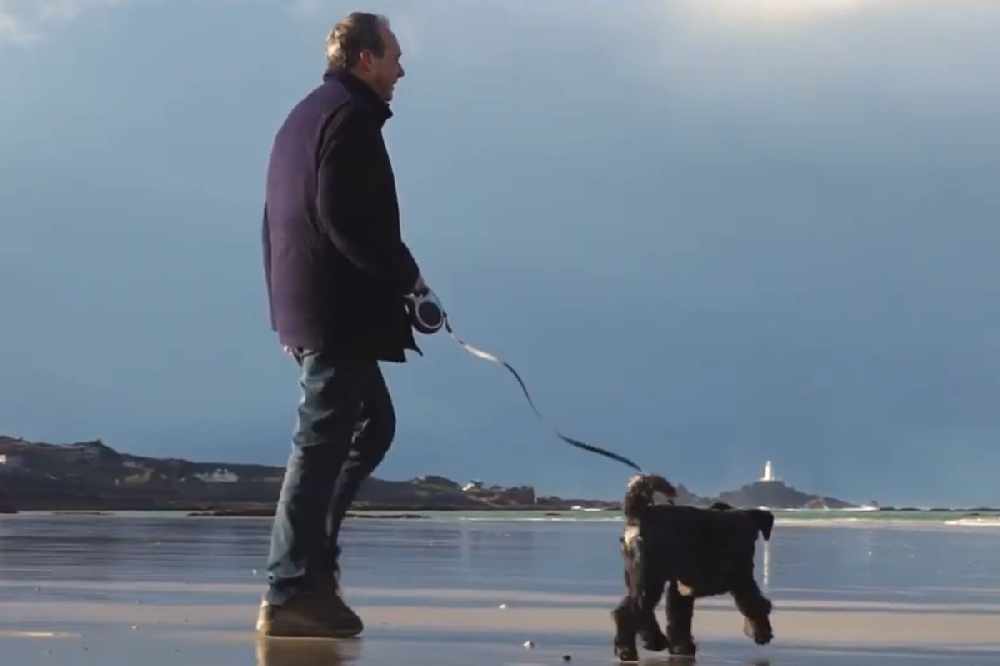 Senator Lyndon Farnham and his dog at the beach.

Islanders will be able to continue to walk their dogs off the lead and ride horses on the beaches, at any time of the day until a States vote on a further relaxation of the rules on 12th May.

The government has announced that restrictions, due to take effect tomorrow, will be suspended for the time being.

A proposition will be put to the States Assembly at the next sitting.

"The Assistant Minister for Economic Development, Tourism, Sport and Culture, Senator Steve Pallett, will, in agreement with the Council of Ministers, lodge legislation to temporarily extend the period that dogs without a lead and horses can be on beaches, until Stay at Home restrictions are lifted.

The Attorney General, Mark Temple QC, has said he won’t pursue offences under the law from 1 May until the States consider the proposal on the 12 May."

The government says it's to address concerns that restricted hours could result in larger numbers of people using beaches during the early morning and evening, making it harder for them to comply with social distancing guidance that we should keep at least two metres away from anyone not in our household.

As the Assembly is not able to debate this matter until 12 May, I have sought assurance from the Attorney General that people walking dogs without a lead, or riding horses on a beach, between 1 May and 12 May will not be prosecuted.

“It is important for the physical and mental wellbeing of Islanders to be able to get out in the fresh air and enjoy our glorious beaches.” -  Senator Steve Pallett, Assistant Economic Development Minister

A statement from the AG's office says:

In view of the Council of Ministers’ decision to lodge an amendment to Regulation 2 (1) (h) for decision by the States Assembly at its next sitting on 12 May 2020 and the current lack of a tourism season due to Covid-19, the Attorney General Mark Temple QC has decided that it would not be in the public interest for offences against Article 2(1)(h) of the Regulations to be prosecuted until the amendment to the Regulations has been decided by the States Assembly.  The Attorney General as head of the Honorary Police has therefore directed Centeniers not to charge offences against Regulation 2 (1) (h) of the Regulations in relation to persons with dogs, horses or ponies on beaches until the decision of the States Assembly is made at its next sitting starting on 12 May.  The States of Jersey Police has been made aware of this decision.

On Twitter last night, Senator Lyndon Farnham said an announcement to extend the winter rules during lockdown would come today.

Thank you all for your comments. A further announcement will made during the next 24 hours setting out the plans for a temporary extension of the winter beach exercise times for dogs and horses.

More than 5,000 people who took part in a Channel 103 online poll, with a majority of islanders supporting the move.

POLL: Jersey's Police Chief tells Channel 103 he's been asking his team for their thoughts on whether the rule banning...

Under existing regulations, dogs have to be kept on a lead on beaches between 10.30am and 6pm from 1st May until 30th September.

More than a 1,300 people signed a petition calling for the restrictions to be relaxed while the island continues to be in lockdown.