Scrutiny: Borders 'May Have Been Opened Too Soon'

The decision to reopen Jersey's borders was rushed and may have been made for economic reasons, according to a newly-formed Scrutiny panel.

One of its recommendations is to make all incoming passengers self-isolate in facilities provided by the government until they receive a negative coronavirus test result.

The borders reopened on 3 July, despite concerns from many States Members at the risks involved, especially for vulnerable members of the community.

Since then, four arriving passengers have tested positive for Covid-19.

The Safer Travel Guidelines Review Panel says the balance of evidence from public hearings and STAC advice can be interpreted as the government placing economic interests above the health of islanders.

It's concluded that the borders may have opened too soon, because the risk of an incoming passenger spreading Covid-19 would be reduced through faster and higher-capacity testing, which is due next month.

When the announcement on border reopening plans was made, the Economic Development Minister said the aim was to get testing turnaround times down to an average of 12 hours. It's currently 28 hours.

8,652 passengers arriving in Jersey have been tested since Friday, 3 July. We have completed 497 more tests since Wednesday, 22 July with 0 new positive.

Posted by Government of Jersey on Thursday, 23 July 2020

24 of the 39 responses the panel received wanted inbound passengers to isolate until they test negative for the virus.  Concerns were also raised about a potential second wave and the impact that would have on islanders' mental health.  Only two respondents favoured the Ministers' policy. 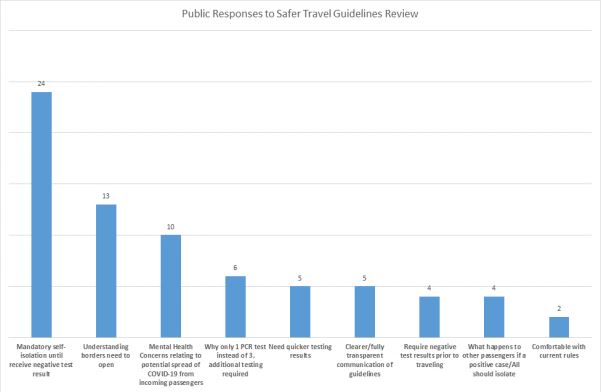 It's also recommended that pre-departure online registration forms be available by another means, and for follow-up text messages to people who don't respond to be sent after one day rather than the current three.

"Analysis by the Panel of other island jurisdictions around the world also shows a stark difference between Jersey and most others, with the majority either requiring 2 weeks quarantine or self-isolation whilst awaiting test results.

"The Panel does not disagree with the need to reopen the border. However, the Panel does believe that this decision was rushed, may have been made for economic reasons, and that States Members were not provided adequate time or information to make an informed decision." - Safer Travel Guidelines Review Panel.

* Not having enough time to consider Ministers' proposals to open the borders.

"The report contained a significant amount of information and Members were only given a 5-day period in which to review it and reach an informed opinion, as against the usual 6-week period.

"Government communication regarding passengers arriving by some means was not as clear as it needed to be. While the report to P.84/2020 did detail the testing arrangements for passengers arriving by private craft or ‘by other points’, it was not clear that passengers arriving on the Commodore Clipper were included in this ‘by other points’ category and would not be tested until the following day. This needed to be clarified during the debate and also created confusion for Condor staff and ferry passengers. Furthermore, States Members were provided with conflicting information within the same package of information regarding the requirement to test on arrival."

"The Panel is especially concerned at the Green rating for the United Kingdom (UK), given the prevalence of COVID-19 there.

"At a meeting with the Minister for Health and Social Services, the Panel was told that the relationship with the countries in the Common Travel Area was taken into account in establishing ratings, and that those allocated Green were based on those in the UK standard.

"The Government’s rating system relies on UK data, rather than Jersey-specific data. This leads to a favourable rating for the UK which may endanger Islanders.

"The Panel sees issues with the rating system but has not collected sufficient evidence to make any recommendation beyond that above at this stage. The final report of this review will look at this matter in greater detail."