CM: "Some States Members Trying To Capitalise For Political Gain" 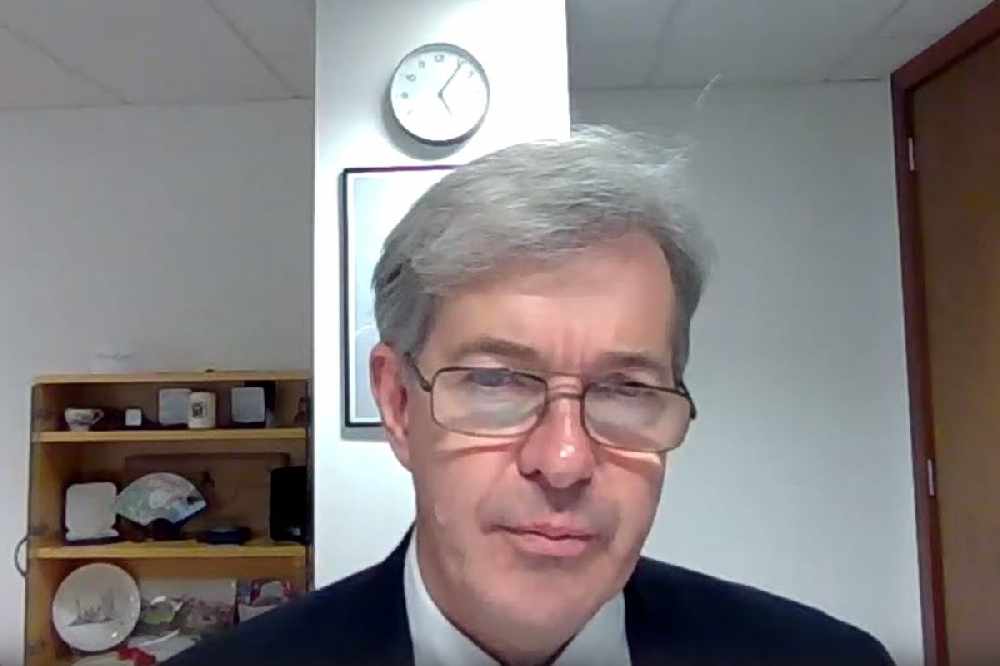 The Chief Minister has accused some States members of trying to capitalise on the opportunity posed by the Charlie Parker controversy for political gain - and to see the Chief Executive, himself, or the government fall.

Senator John Le Fondre has spoken in the States Assembly after a huge outcry over Mr. Parker's role with NewRiver, which he took in September.

It's been revealed that the States CEO didn't get written permission and didn't tell his employer, the States Employment Board. Mr. Parker and the Chief Minister have both apologised for that.

The Chief Minister says written permission has now been granted by the SEB, 'subject to completion of certain due diligence matters'.

The original statement sent to Channel 103 last Tuesday evening said that the Deputy Chief Minister Senator Lyndon Farnham gave clearance for Mr. Parker to take the job. It was later admitted, in a letter to the Chief Minister from Mr. Parker, that Senator Farnham had reservations and concerns about the appointment.

Assistant Chief Minister Constable Richard Buchanan and the government's Director of Communications are now investigating the inaccuracies in the original statement provided to the media.

In his letter, Mr Parker said the opportunity with NewRiver allows him to use their expertise, research, and contacts to better understand the future of retail centres, the impact of online shopping and the regeneration of town centres - which can help to benefit Jersey.

He also hit out at the media and commentators and said they've been choosing to present and misrepresent the facts of his appointment.

Suggestions of a conflict of interest have been rejected after he said NewRiver has 'no operational interests in Jersey'.

The States CEO also revealed that he will receive no salary for the NED role, with the money instead going to a range of local charities - including some in Jersey. 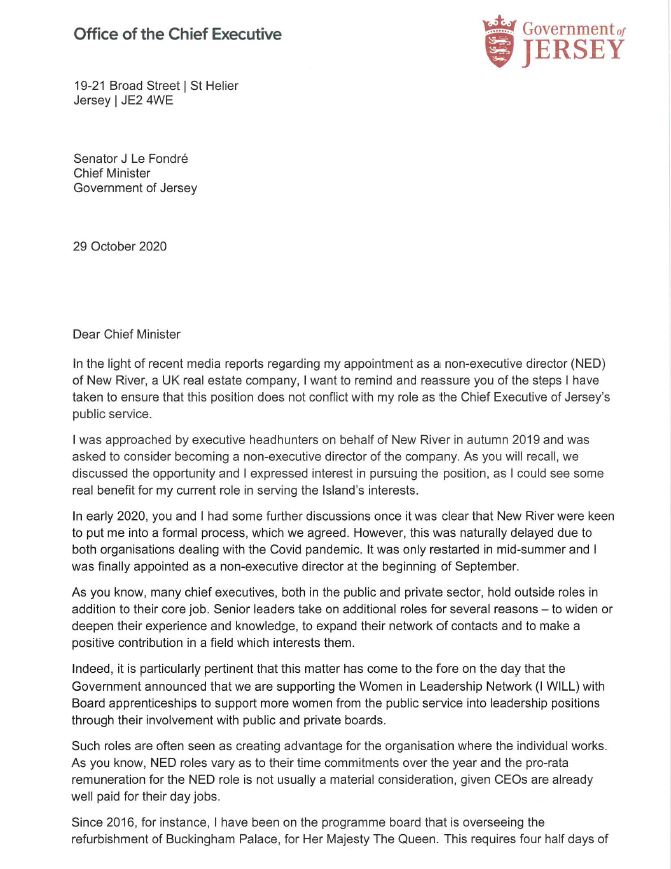 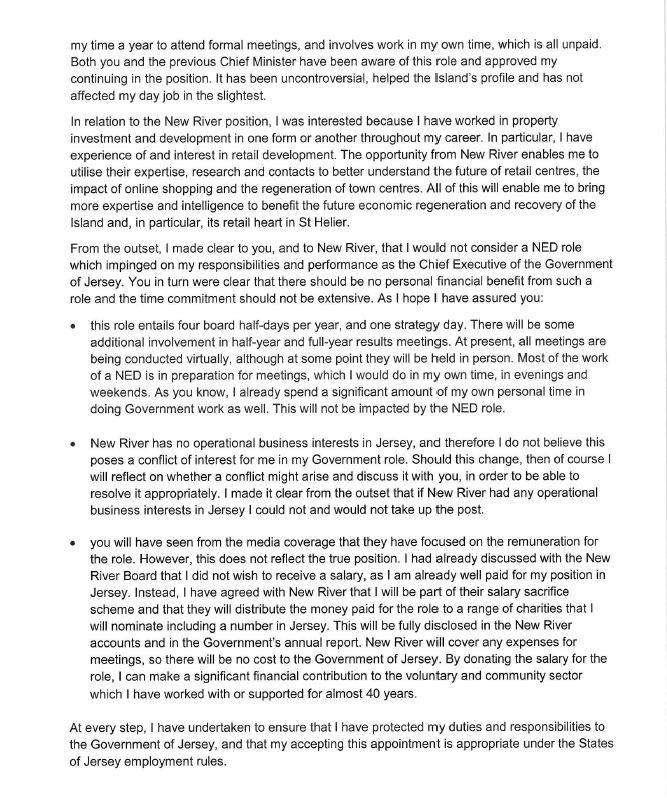 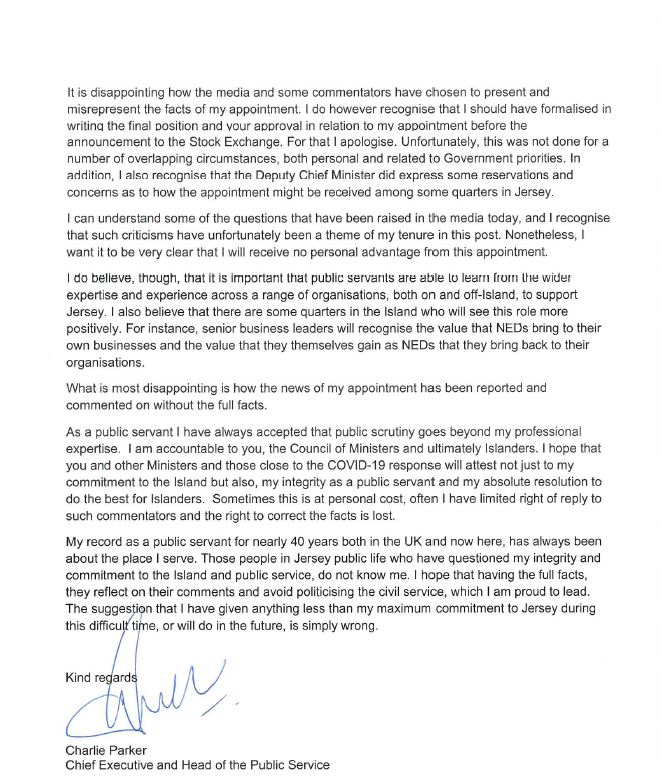 In his statement to States members, Senator Le Fondre, who has announced a review into conflicts of interest, said he was disappointed with some members for choosing to make public statements without approaching him directly to understand the facts.

He has said the States CEO 'has accepted there were errors' in getting agreement for the role, with 'the shortcomings that led to this situation' to be corrected 'immediately'.

Senator Le Fondre has also hinted that Mr Parker will be asked to step down from the non-exec role.

"Whilst the Council of Ministers expressed their support for the Chief Executive in the role he is doing, they have felt that the Non-Executive role is not compatible with the demands of his duties at this time.

You can read the full statement from the Chief Minister to the States Assembly below. 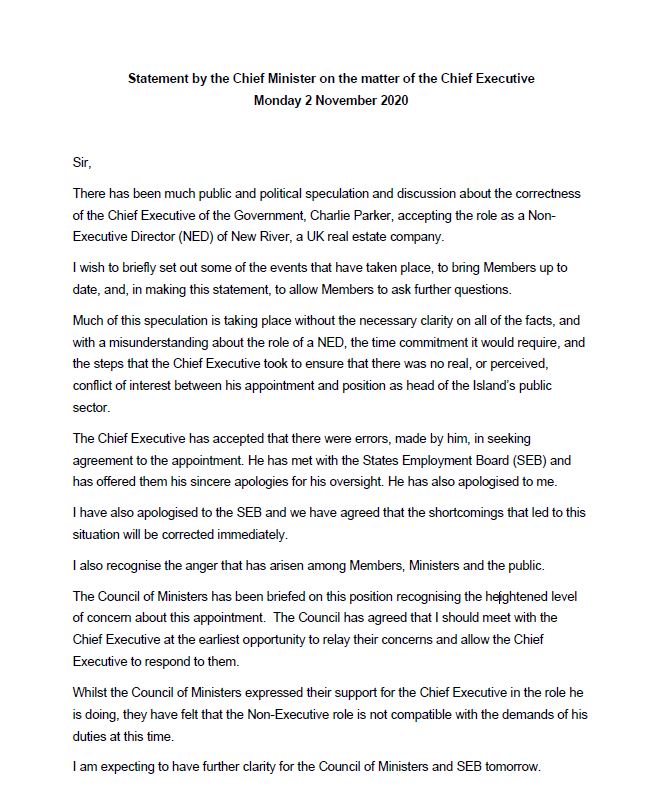 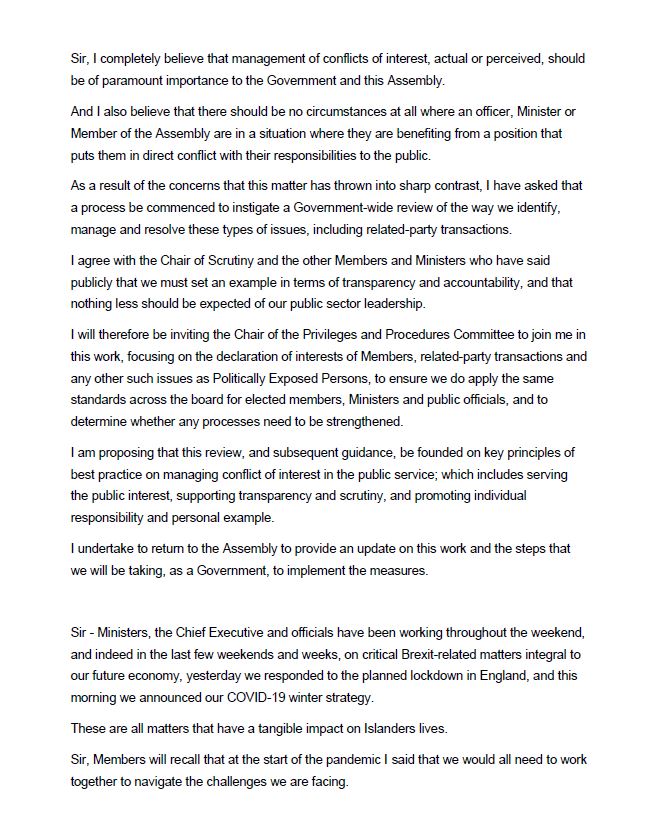 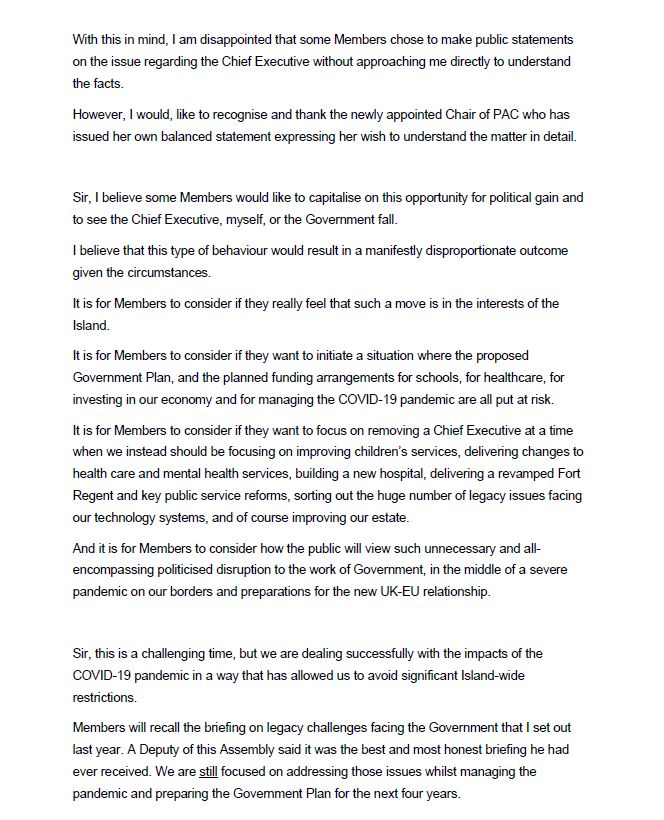 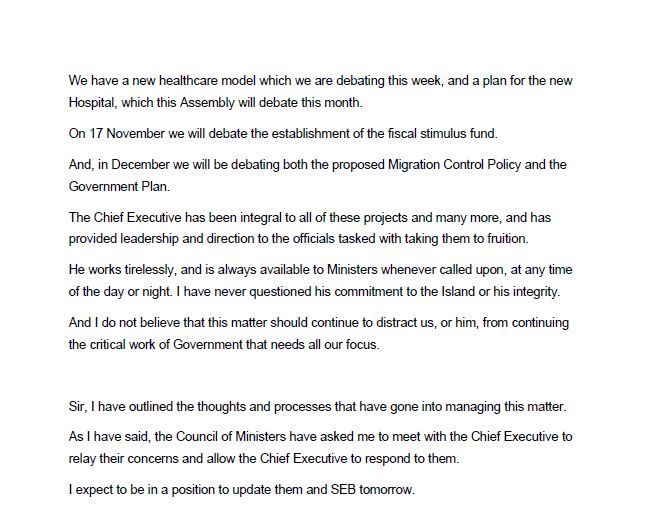 The statement from Senator Le Fondre came just hours after the vote of no confidence motion against his leadership officially lodged.

It has been put forward by Senator Kristina Moore and co-signed by six other politicians - who are:

This proposition follows the debacle over the States CEO's non-executive role with NewRiver - which Senator Moore says is a symptom of much wider problems within Senator Le Fondre's government.

The Corporate Services Scrutiny panel chair argues that islanders do not have confidence in the current leadership to guide Jersey through the troubled waters presented by Covid-19, Brexit, and a global economic crisis - let alone other key challenges such as a population policy and affordable housing.

Senator Le Fondre has also been accused of failing to recognise the need for urgent action to minimise the damage that Covid-19 would cause, failing to release copies of STAC meeting minutes, a lack of transparency, and failing to effectively oversee the public service.

In a seven-page document, Senator Moore says the reasons for islanders lacking confidence in his leadership boil down to:

"The purpose of this proposition is to restore faith in the leadership of the Island and to call for the observance of good governance, greater accountability and transparency. If members will support this proposition, they will be voting to rebuild the culture of the organisation that serves the public and to put Jersey back on track.

"A vote pour will be a vote for values and integrity. A vote pour will lead to a smooth transition offering certainty, clarity and a vision that will make islanders proud again.

"Islanders do not have confidence in Senator Le Fondré. If he will not resign, the Assembly must support this proposition and bring his tenure as Chief Minister to an end by passing a vote by which they confirm that they have no confidence in him." - Senator Kristina Moore.