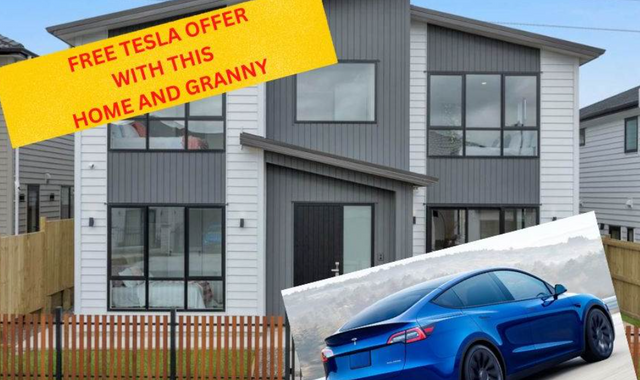 A New Zealand property owner is hoping to stand out from other sellers by offering a free Tesla to the person who buys their home.

The house - a seven-bedroom, five-bathroom property - has reportedly been on the market for weeks.

New Zealand house prices have seen their biggest drop in 30 years and were down 10.9% in October - their 11th consecutive month of falling.

So, the owners of 22 Dungloe Avenue, Flat Bush, had to drop the price and do something to stand out from the other 400+ listings in the Auckland suburb, Barfoot & Thompson residential sales agent Kapil Rana told Stuff.co.nz.

The price of the car is a "bonus" rather than adding to the market value, he added.

After purchasing the property, the new owner would get to pick the car's colour - the Tesla Model Y has five options - and it will then be ordered and shipped straight from the manufacturer.

With room to park six cars, the house also has a granny flat on the bottom floor, which would allow its new owners space for any extended family.

House prices in New Zealand rose roughly 40% over the pandemic before peaking last November at levels repeatedly described by the central bank as unsustainable. However, as the central bank has aggressively hiked the cash rate, and mortgage rates have followed suit, prices have come off sharply.

Many economists expect that with the cash rate forecast to go higher, house prices still have further to fall.